7 Difference Between Python and Java | Which has More Future Jobs?

Java and Python are the two most popular programming Languages. But, what is the main difference between Python and Java?

Often students and developers have confusion about which language to choose whether Python or Java as their programming language!

Are you not sure whether to learn Java or Python?

Both the programming languages have their pros and cons.

In this article, I am going to explain- Top 7 Java vs Python comparisons one should know.

According to Tiboe Index the latest research shows, that the Java is in 1st place and Python is in 4th place. 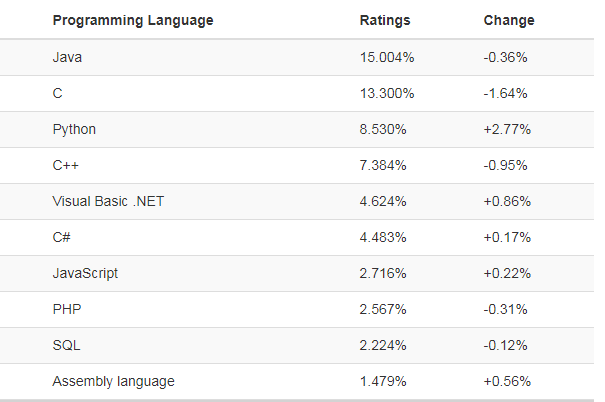 If you look at the Google trend, Python interest is rapidly growing. The popularity of Java is declining over the years. 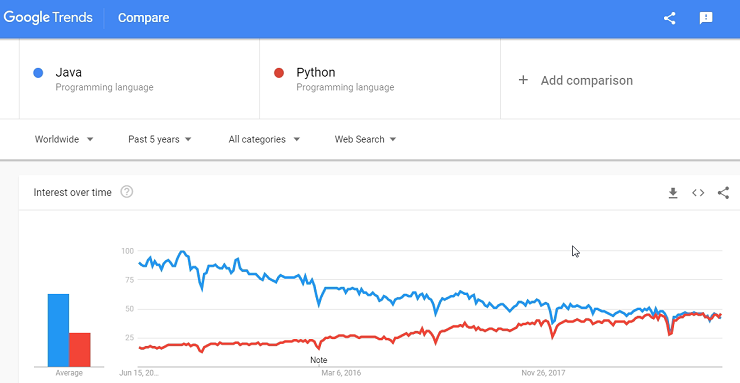 Java is slightly ahead of Python right now. But looking at the trend, Python is going to beat the Java in a couple of years.

Due to the rapid increase in the statistical programming language Python has become the winner and it has been accepted the majority of the industries.

These two programming languages are ruling the business world.

Here, we are going to make a comparison between Java and Python, let’s get into the topic.

What is a programming language?

The programming language is a formal computer language. It has analytical rules that instruct the computing device to perform tasks to produce different output.

It also refers to high-level language and used in computing programming to implement algorithms.

Thousands of programming languages are created and more are creating every year (based on the Wikipedia data).

Most programming languages are written in imperative and few are written in declarative form. The description of language is split into two components as semantics and syntax. If you are new to these terms, don’t think much about it right now. While going through this article, you will understand.

Java and Python are the two most paying programming languages if you are looking for a job.

Python is the most popular programming language.

In technical words, we can say it is interpreted, object-oriented and high-level language with dynamic semantics for Web and Application development.

Python is a high-level built-in data structures with a combination of dynamic typing and binding.

As it attractive in the field of Rapid Application Development it uses for a scripting language which connects with the existing components.

Why everyone loves Python?

Programmers love python because it is easy and simple to learn and write the code when compared to other languages.

It has a different syntax that focuses on readability, so therefore it can reduce the cost of the program maintenance.

Having Python certification will make you stand apart from other python developers.

Once, python modules and packages are designed, the code can be reused in different projects and it is easy to import or export the modules.

Java is another one of the most popular programming languages.

Java is an object-oriented and class-based programming language that also serves as a platform.

It is an independent platform, which means once you write the code you can run on any platform.

Syntax of Java is similar to C and C++ but, it has low-level facilities than either of them.

A virtual machine, called the Java Virtual Machine (JVM), is used to run the bytecode on each platform.

7 Difference Between Python and Java

Java and Python programming languages have similarities and a lot of differences as well which makes very difficult to choose which is the best one.

Let’s start our comparison and find out who is the winner in this battle.

Let’s make a comparison between Python & Java and have a clear idea about the unique features of each.

Java and Python both are object-orient, python uses dynamic types but java is quite opposite from this and uses static types.

This is the main difference that affects the design, troubleshoot, and write the program in a simple way.

Let us consider one example in both languages.

Let us write the code to print “hello world”

In python just we need one line to print “Hello World” but in Java, we need to define a class called main, it will define whether the class can access to other class or not.

We need to declare the argument’s type and then it will print the result.

So, it is clear that java take longer lines when compared to python

Let us check another example

Code that is composed of dynamic types is less verbose than static typing. In dynamic, variables and types need not be declared but in static, they need to be done.

Let us consider an example from Python and Java and compare them.

Python maintains the code clarity and it permits the programmers to hold the clean code and which is easy to read.

Many developers are choosing Python due to the less code.

Even though Java is coming with the new feature to avoid the long line codes, but it still Java heavier than python.

You can check the programming example we have seen earlier. Python requires very few lines of code than Java to implement the same logic.

Even if you are a beginner, Python is one of the easiest programming languages to learn.

Java is faster than python because it has its own compilation, it executes the code faster.

Python is an interpreted language it derives the data type at run time. So compilation of the code takes time to execute.

Python adapts legacy system more effectively when compared to java. It changes the existing system language and gradually changes the code rewriting the system as java does.

Java has the number of large code lines. This means the system is larger and more numerous than the Python legacy. It is difficult to adapt legacy system when compared to Python.

Java is highly portable because it is available everywhere, from tiny J2ME feature phones to huge mainframes.

Python is also portable but not as much as Java because the actual run time is at many places but the modules trend to a mixture of python and C.

What is the compilation in programming?

Compilation means it converts high-level programming language to machine level language so that the computer can understand the instructions.

Java can be compiled on any platform.

Look at another difference between Python and Java.

Let’s take an example for both the languages.

In above both cases, we are declaring and creating blocks. The scope remains the same in the file resource and it closes when the code exits from the block.

In python, if you open or read the file from it, once the loop reaches the end of the file, the loop exits.

When compared to Python, Java is more complicated. If you want to read or open a file you need to open BufferReader by passing the FileReader argument. Once the file ends we need to check the null value.

We can say that python can handle text files easily. But it is very difficult in Java as compared to Python.

Pros and Cons of Java and Python

Both languages have some pros and cons.

Java and Python both are unique in nature and capable of doing things in a different way.

You can choose any one from these two that suits your requirements. To gain more knowledge in Python, you can also consider taking a Python course.

So, if we compare like this we can observe that both Python and Java go in hand to hand. Both are having pros and cons.

My personal choice: If you’re new to a programming career, it better to stick with Python because its syntax process is simpler and easy to learn.

However, if you are coming from a C/ C++ world, then Java would probably pretty familiar to you. It all goes down on what you plan to build and where you feel like journeying with your new skill.

This is all about the difference between Python and Java. If you still have any point to discuss and not sure which programming language is most suitable for you, ask your query in the comment. 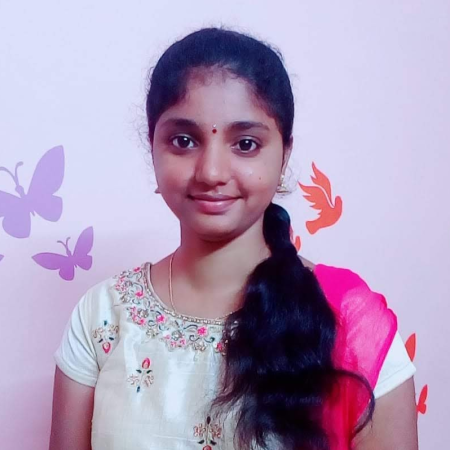 Usha Sri Mendi is a Senior Content writer with more than three years' of experience in writing for Mindmajix on various IT platforms such as Tableau, Linux, and Cloud Computing. She spends her precious time on researching various technologies, and startups.
Your name can also be listed here. Got a tip? Submit it here to become an CSEstack author.