This is a complicated question to construct DFA. To solve this kind of questions use divide and conquer strategy.

Construct DFA for a string which has a total number of ‘a’ is odd:

This is a simple DFA with 2 states. One is starting state and other is the final state. It accepts all the string which have the occurrence of odd numbers of a.

There is no change in the transition state for the occurrence of b. So occurrence ob b forms the loop on the same state.

Construct DFA for a string which has a total number of ‘b’ is not divisible by 3:

Step 1: construct DFA that accepts the string which has the total number of b’s is divisible by 3. 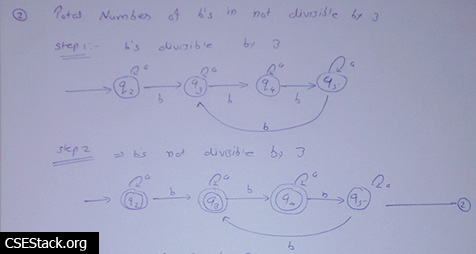 Take the combinations of all the states from both DFAs. So there are 8 states (4*2) which include 3 final states.

Remove all the unwanted stated from DFA. Unwanted states can be which are not reachable from starting state, a dead state which does not lead anywhere. Combine all the states that have all transitions to the same states.

In this case, there are not any unwanted states in DFA. Also, don’t have any common states to be combined.

This answer is elaborated based on the question asked in GATE CSE Facebook Community for GATE aspirants.

To construct DFA, it needs to practice. You can refer to the book Theory of Computation by Ullman to practice answering such kind of questions.

Note for GATE aspirants: If you are solving this question in GATE exam, it is time-consuming. In GATE, there are MCQ questions. There will be four answers with four DFA automata. Instead of constructing DFA, try to find out the answer by matching language given in the question with given automata in the answers.  (Reference: How to prepare for GATE)